BeatBlasters III is an Action and Platformer game for PC published by Chainsawesome Games in 2014. Get along with your protagonist to save music!

As a fan of music, your protagonist was living peacefully in its city until the music enemy Tyrannical Butcher came. 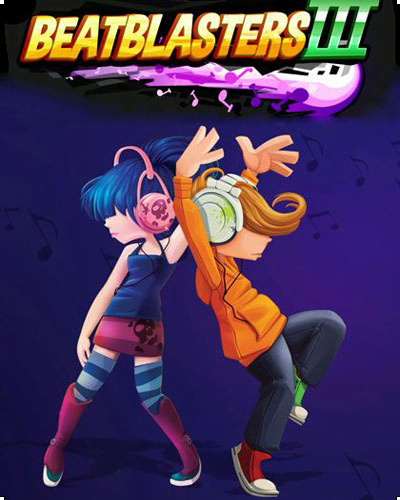 The players have to take control of these characters to stop him. Giana and Joey can’t even live without music for one day. That’s why they decided to defeat the enemies with their special powers. There are many power-ups at BeatBlasters III which can be used freely. The Jet Boots, The BeatBlaster and The Shield are some of the items that can be used. For example, The Shield will protect your character against a high amount of enemy’s damages.

The Jets Boots will increase your speed as well. But The BeatBlaster will be your magical item at this game. It has many special abilities for the players. Remember that all of this item is limited. So, The players shouldn’t waste it when they are facing weak enemies. Accapella City is the place that they live on. All of the people were living with their lovely music without any problems. Now, They are so sad because of the attackers. You’re their only hope that can save the city against the dangers.

There are some game modes at BeatBlasters III too. Recharge mode is one of the modes that can be tried after finishing the story mode. The enemy characters have more powers and HP at this mode. It’s really hard to finish this mode without skills.