Chronology is an Adventure, Platformer and Puzzle game for PC published by Osao Games in 2014. Become an old genius with the inventing skillings!

As an old inventor, you are going to begin a journey with your brave friend, The Snail. 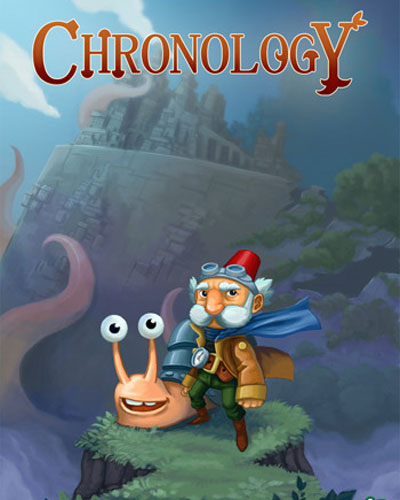 Chronology is a mind-bending mix of puzzle, platform and adventure where you defy time by manipulating the past and the future, in order to fix the present. Play as the Old Inventor and his sidekick The Snail, and take advantage of their special abilities – travel back and forth in time, stop time, manipulate objects and solve puzzles.

Chronology is a game that very nearly didn’t exist at all, and wouldn’t that be a shame. The game was Greenlit on Steam last year only for the original development company, Progressive Media, to fold beneath it. Fortunately, former team members wanted to see the game come out, and formed Osao Games to complete work.

The gameplay centers around a two-character mechanic: a little old inventor, and his trusty companion, the snail. Neither character is given a name beyond that, but neither do they really need them. The inventor is able to travel back and forth between two time periods: ‘Before’ and ‘After’ the cataclysm which starts the game. The snail is able to stop time, but her hard shell also serves as a positionable platform for the inventor to stand upon. While in some cases, that merely gives an option to ease up a tricky platforming section, in other cases it’s critical to solving puzzles.