MadOut BIG City is a Racing, Simulation and Action game for PC published by MadOut Games in 2017. Race without rules and win!

If you’re want to be the champion, you have to create chaos in different locations of the city! Although the police forces won’t let you do that easily. 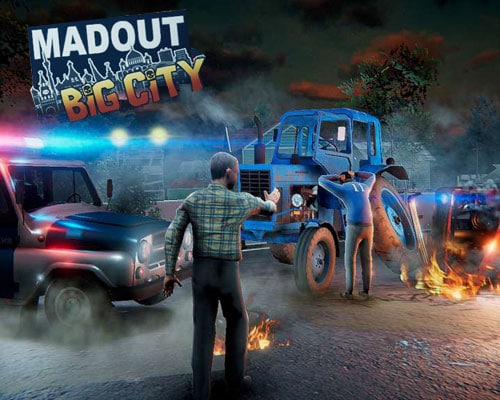 You can’t do all of them without tutorials. So, Don’t make any chaos in the city without training. There are no rules – only the need to win, you can create any chaos. Open world game, with free, roam game play, many cars, missions and – online mode! Quite a cheesy yet interesting game we do like physics, it looks like one of those android games you can get on google play but we do enjoy it, its very cheap as well

pros: Arcade Style racing game very easy it feels familiar in handling. it has numerous modes 4 distinct modes, Death race, Normal 1 lap race or sprint, and time attack, and missions marked by the big M for master. Open world and you can get vehicles off the streets or you can buy some right at the far end of the map. Good graphics for unity and an indy developer. feels like my good sandbox partially.

Love the ai perfectly programmed to mimic russias driving habits we find it quite funny. any car you have nicked and you like it can be saved in the garage. hint there is a supercar hidden in the game that can spawn in the streets that the best car in the game so far. Quirkiness: It has badly translated Russian to English if the devs want a guy to fix the UI we could so it says good English.