Major Mayhem is an Action, Casual and Adventure game for PC published by Rocket Jump in 2014. Save your girlfriend who has been kidnapped!

You need to fight with evil forces to save her. There will be many enemy characters at this game protecting your girlfriend. 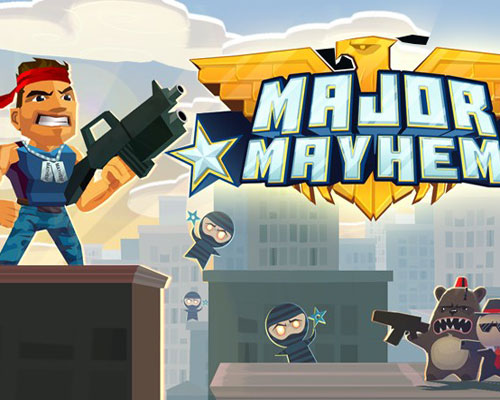 It’s really hard to reach this aim. It means that you should kill thousands of enemies to get to her. The levels of Major Mayhem are non-stop. If you don’t kill the enemies, They will kill you! This is the main rule at this action game. There are three environments in total for this title. Tropics, Metropolis and Desert are the names of them. Each environments will have fifteen levels inside. But if you want to get the maximum scores, There are side missions for the players!

More than 150 side missions have been designed by the developers. When you complete any of them, Extra scores get added to your account. The player can purchase new weapons with the scores. Some of the weapons need a large amount of scores to get unlocked. So, You have to try hard for them. Kill any enemy on your way to get more scores. There are twenty types of guns available at the store. The players can also customize the main character.

You can buy things like hat for him. This kind of items don’t cost so much. So, If you like to have a handsome fighter, Get them with low prices. Major Mayhem got great scores from the critics. It has also got 9/10 at Steam Network. It seems that this would make hours of fun for the players who like action adventure games!