Neighbors From Hell 2 is a Casual and Adventure game for PC published by Nordic Games in 2004. Bother your neighbours!

Try to bother your neighbours while trying not to be caught by them hiding in different places. 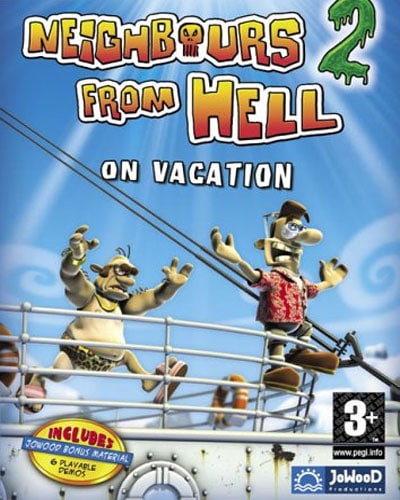 You made your neighbours angry many times in the previous version. But it’s a little bit different now. As they’re on a vacation, you have decided to experience your satanic missions again! There are more environments than Neighbors From Hell at this version. That’s why you need to be more patient to finish the missions successfully. When you sabotage, None of the neighbours should see you. Otherwise, you will get punched by any of them within some seconds.

It’s possible to hide in some special places to be out of your neighbours’ sights. You can use your own plans to do the missions much faster. The faster you do them, The best score you get. There are also some other missions that give players extra scores. If you have experienced the first version, Neighbors From Hell 2 will be so easy to play. Because there isn’t any big change in the controls. You will control the main character with your mouse again.

It’s the time to roam freely in the environments of Neighbors From Hell 2 to sabotage! It’s also good to know that the graphics have got improved than the previous version. So, you will enjoy making the neighbours angry much more than before.

Features of Neighbors From Hell 2: