Pitiri 1977 is an RPG, Platformer and Adventure game for PC published by ILIKESCIFI Games in 2014. Save your brother from the dark forest!

As a monster, who lives in a dark jungle, kidnaps your brother, you are going after him to find him. 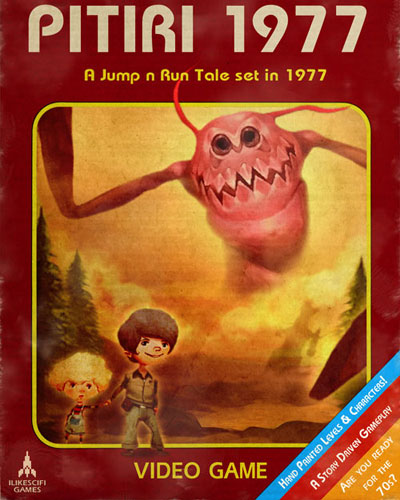 Now isn’t this great…! It’s my brother’s birthday and this Claw-thing crashes into our house and takes away Sammy! I guess someone has to play hero now… Pitiri 1977 is an adventure-platformer with much exploration in both world and story, and is paying tribute to its classic pioneers – not only by its gameplay,but also by its background story. A narrative, that is set in 1977 (the glorious year of Star Wars IV, the Atari 2600, the Voyager One spacecraft & Led Zeppelin’s “Presence”), in an imposing world, created by using hand-painted graphics, characters, solid physics and a 1970s soundtrack, gradually opened up by the player’s acquired abilities.

You play as a kid with supernatural powers, whose brother has been kidnapped by an unknown evil. On your quest to get your brother back, you venture through a twisted 70s science fiction utopia that lies beyond the known… Winner of the ‘Content Award 2010’ for Games and the Impulse XC Sponsorship 2010, Pitiri 1977 is shaping up to be a rather striking-looking game.

There are also different weather types at this Indie game! Remember that rainy or snowy weathers may put you in troubles! If you’re ready to rescue the little boy’s life, Don’t waist the time. Try this RPG Adventure game for free on FreeGamesLand.