Rooster Teeth vs Zombiens is a Strategy and Action game for PC published by Team Chaos LLC in 2014. Zombies in the laboratory!

AS you were working in the laboratory, green zombies created from chemicals, and now you must face them. 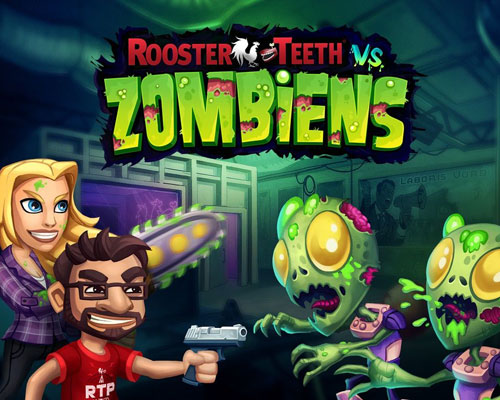 The Zombien menace has, mostly unintentionally, descended upon the Rooster Teeth studio. It’s up to you and the RT cast members to survive their onslaught. After an Unidentified Flying Object becomes an Identified Grounded Object (it’s a space ship) right in the heart of the Rooster Teeth studio, legions of zombie aliens (Zombiens) start coming out of the woodwork and get all hostile up in the studio. It’s up to you, as one of six playable characters, to find and team up with the Rooster Teeth cast members to survive what will one day be known as the Rise of the Zombiens. For as long as possible, at least.

In this action/strategy game, you will have to survive in the studio amidst a variety of randomized circumstances: random supporting party members (chosen from eight Rooster Teeth cast members in the game, each with their own unique VO), random weapons, random zombien waves, random crafting materials, and more. You never know what you’re going to get when you set foot in the studio, but you’re going to have to make the best of what you’re given.

To survive, you’re going to have to get weapons from Weapon Dispensers, build traps, construct defenses, and stay on the move so the Zombiens don’t corner you and devour your innards.

Features of Rooster Teeth vs Zombiens: