Sacred Fire A Role Playing is an Action, Adventure, and RPG game for PC published by Iceberg Interactive in 2021.

An unusual role-playing game made in the form of a visual novel. Review without spoilers. The gameplay is a mixture of RPG and visual novel. 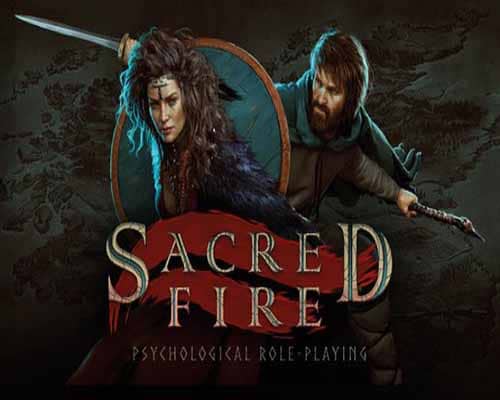 Our hero lives in a barbarian village, on which the forces of Rome are advancing. At the same time, the inhabitants of the settlement also sort things out among themselves. we will not spoil you, in short – there are plots. The seriousness of the role-playing system begins to manifest itself already at the creation of the hero. You need to choose stats and/or perks for him, which quite strongly affect the passage.We are told a little background story and the adventure begins. Basically, all events in the game belong to one of three types of activity. Let’s consider each of them. Conversation/decision making. In a good RPG, you can’t go anywhere without it. There are a lot of dialogues, there are also enough solutions to twist the plot. Here we build relationships (can be very different) with other characters, we acquire certain features of the hero that will significantly affect the passage.

The battles are normal. At some point, you will have to fight with ordinary opponents and then a battle takes place, which is a sequence of moves of both sides of the conflict. Ordinary battles are remembered for the fact that enemies die with one blow, and if we fail, they beat weakly.