Serious Sam Double D XXL is a Platformer and Action game for PC published by Devolver Digital in 2011. He is now with his friend!

Here you will have a friend beside you where you will be able to switch between them and fight through the waves of enemies. 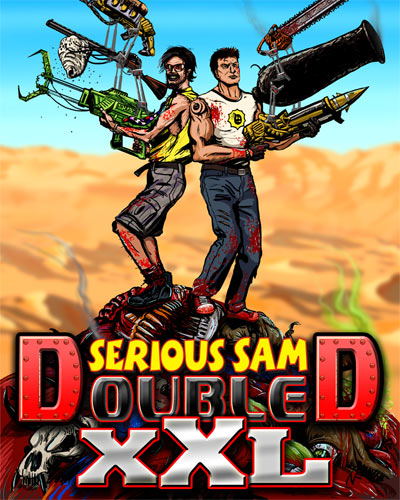 This version is much different from the other ones. All of the environments are in 2D. They are also really simple with normal graphics. You can control the characters much better with this kind of camera. The developers have focused on the gameplay more than the graphics. So we are facing a gameplay based game named Serious Sam Double D XXL. The levels of enemies are a bit higher. Also, their number is much higher. You should make damages for all of them within some seconds.

By killing each enemy, You get scores. Use these scores to buy new weapons. Your previous weapons can be upgraded too. Before starting the game, You can choose the difficulty. If you want to get the best scores, Try it on hard difficulty. You need the most powerful weapons at this level to be successful. If you don’t own good weapons, It would be really hard to win. Dinosaur is a kind of enemy creatures with great powers. Be careful when you face them.

Because they are the most dangerous creatures at this game. Your weapons will have limited bullets. Don’t waste them in the first part of the game. Save them for the next levels. After finishing some of the levels, Players have to defeat Boss fights.