Swords and Soldiers HD is an Action, Strategy and Casual game for PC published by Ronimo Games in 2010. An old fight among three tribes!

There are three tribes which are in conflict with each other, and you will be choosing one to begin the battle. 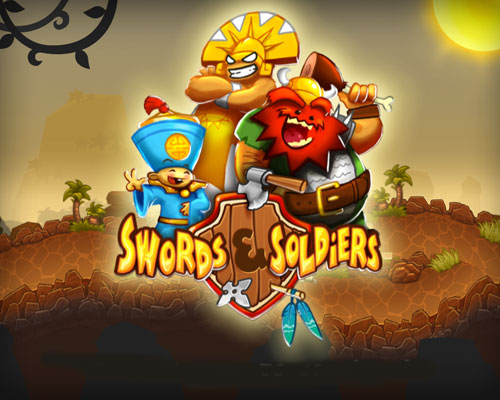 When you chose one of the tribes, It’s the time to complete the tutorial part for that tribe. It won’t take more than some minutes to learn fighting. Each tribe needs gold mines at first. Because you can do nothing without gold in Swords and Soldiers HD. When you earned enough gold, You should train the first warrior. The enemies will attack from the right side of the screen. These warriors should defend against them. If you don’t train enough warriors to defend, You will be the loser at the battle.

There is a map in the bottom of the screen that shows everything. The enemy troops can be shown on this map too. Before they get close to your village, They should be defeated by your warriors. Otherwise, They will kill the gold miners at first. Then, They will get all of your coins and it would be lost for that level. All of the characters have specified health points. When this HP equals to zero, That character will be dead. There are other ways to defend the village too.

Spells are the second abilities that each player can use in the war. These spells work by Mana. This kind of energy can’t be earned by the workers. You will have limited amount of Mana in the game. But its storage can be upgraded to higher levels out of the battles.

Features of Swords and Soldiers HD: