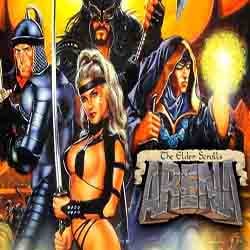 The Elder Scrolls Arena is an Action, RPG, and Adventure game for PC published by Bethesda Softworks in 1994. This is where it all begins!

Emperor Uriel Septim VII is betrayed by Jagarn Tharn, a court warrior magician, who locks up the emperor in a dimension created by himself, taking advantage of this to supplant his identity, thus initiating a dark reign.