The Messenger is an Action game for PC published by Devolver Digital in 2018. Save the world with the skills you have!

Play as a ninja who is about to survive the demons and bring a scroll to his clan in a cursed world. 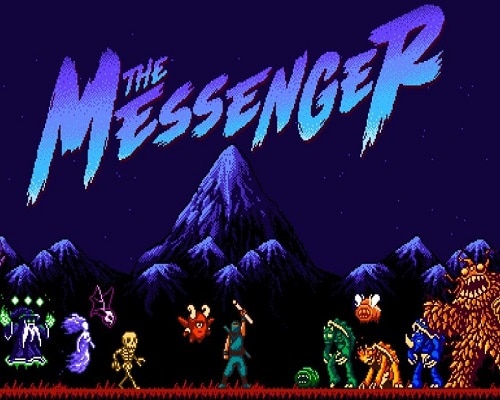 As a demon army besieges his village, a young ninja ventures through a cursed world, to deliver a scroll paramount to his clan’s survival. What begins as a classic action platformer soon unravels into an expansive time-traveling adventure full of thrills, surprises, and humor.

This game is pretty solid. Everything feels great, and it has a few innovative gimmicks. That said, it completely ruins everything at about 75%. It turns a loveletter to NES Ninja Gaiden into this awful backtracking nightmare. Completely shoehorns in Metroidvania elements in at the eleventh hour. Buy this game, but stop once you unlock the map.

When the game opens up and lets you revisit stages, it is enjoyable to revisit them to find all of the collectibless (45 in total, none extremely difficult to get) and see what the stages look and sound like in their alternate forms. That said, the game’s Metroidvania influences are fairly slight. You won’t be doing much item collecting to unlock new paths. Rather, you use the gems (money) you collect to purchase new abilities. You can play it for free now.

Features of The Messenger: