The Promised Land is an Adventure, Casual and Strategy game for PC published by Buka Entertainment in 2012. A relaxing life on an island!

As you have guided a group of travelers into an unknown island, you are going to be responsible for helping them live here with their limited equipment. 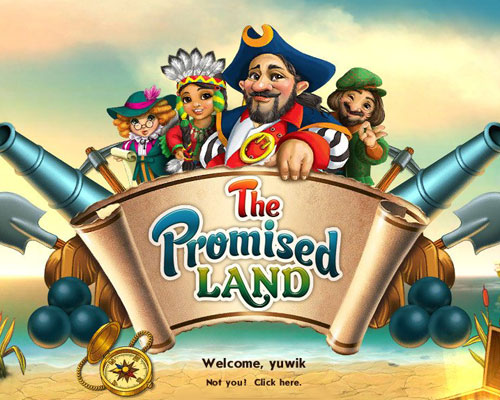 Become a leader of a little group of settlers to create a thriving colony which will envy even the developed nation! Who says it would be easy?! An untamed land where you will have to make everything on your own –to provide your people with food and shelter then to give them job and protection. Day by day you will have to remake your production plans, switch your workers to find out the best solution for each industry. But keep in mind, that every citizen has his own temper that one day can be shown off. And that’s not the only difficulty that may will face. Pirates and wild tribes are all around this Promised Land to disturb your presence and development here.

To create a developed colony one will not only need to become keen in production, but also in science. Experience points that you earn in the Academy, will be needed to get the access to advanced technologies or your town would be just another village on this land. Think well over what and where you spend your points on, because your choice will depend on the fate of the entire colony!

The Promised Land, a brave new world , the hole nation – all this lies in your hands! Become a true leader, a chosen one, a father of nation! Guide your colony to the victory of the modern superpower! We collected all the best that is in games of this genre, arched by exciting mini-games and carefully turned it into the deep and breathtaking adventure!

Features of The Promised Land: