To The Moon is an RPG and Adventure game for PC published by Freebird Games in 2011. The story of an old man in a relationship!

A happy doctor couple who can help the people who are about to die to dream what ever they want. 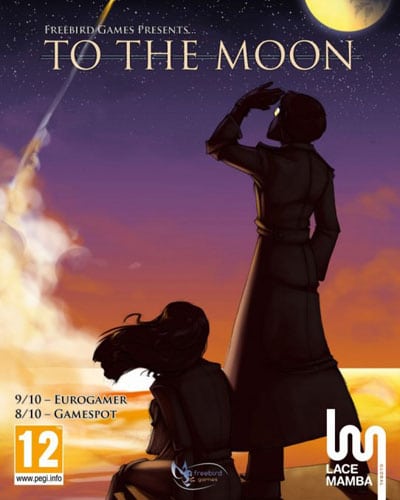 You will help a man named Johnny at this time. He is spending his life with many problems. He may die within some days. But he wants to have a short look at his life with good or bad memories. For example, Marriage is one of this great happening in Johnny’s life. But the worth happening was his wife’s death. He has really bad memories of it. But everything has passed. Life is going on very fast. All the things that you will remember are memories.

Two doctors have an operation with Johnny. It’s really hard to save his life. But helping him to review the past would be enjoyable for this old man. The story is one one the greatest ones in the Indie games history. Although it runs in environments with low graphics, It has good effects on the players. The gameplay is also great with RPG elements. Maybe it seems that this game is another useless title. But it has got seven Game of The Year awards from the festivals.

Also, the Gamespot website has given it an 8/10 score. Which is incredible for an Indie game. Players on Steam have rated it 10/10! Its meta on Metacritic is 81/100 from critics’ reviews. Everything tells that we are facing a masterpiece! If you haven’t tried it, It’s not late.

Features of To The Moon: