World of Goo is a Puzzle, Strategy and Casual game for PC published by 2D BOY in 2008. Lead the drops of oil to their destination!

These little oil drops, living as special creatures, need your help in order to get to their destination to make a lader. 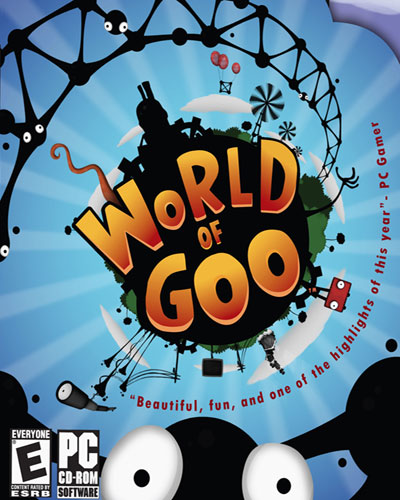 Your creativity is the most important thing at World of Goo to be successful. All of the environments are based on physics. So, If you don’t attach the oil drops rightly, They will fall apart. There are lots of obstacles on your way that will prevent you reaching the reservoir. If the oil drops get closer to the obstacles, They’re in danger. The players have to distance them from the dangers. Otherwise, They will be wasted badly. In that case, You will be in a trouble finishing that level.

Some of the environments get moved in specified periods at this game. That’s why you need to build the ladders fast. If you build a ladder wrongly, You shouldn’t worry. Because most of the balls can be replaced. But there are also some oil drops that can’t be moved after you place them. When you finish some levels on a planet, You will be moved to the other planets. The environments are designed differently. So, You won’t get bored of the graphics at this Puzzle Casual game.

As some of you know, World of Goo is an award-winning game which has got 90/100 average meta based on the critics’ ratings! It’s one of the greatest puzzle game ever made only by two people!

Features of World of Goo: